Despite it being the beginning of spring, a time when a young man’s fancy was said to turn... a tad carnal, Henry Becket was quite firm when he refused his friend’s offer to attend an orgy. He was well aware that Allan had made the suggestion out of a combination of pity – Henry had been divorced and single for many years – and pride at he himself being invited to the Bacchanalian event. But Henry said no. He justified his refusal in various ways, including faux-morality and a fake pride, but the truth of the matter was that Henry Becket didn’t want anyone to gaze upon on his fading, flabby body and burst out laughing. When it eventually transpired that the orgy’s actual attendees had been pistol whipped and robbed in flagrant by the Albanian gangsters that had organised the event, Henry was a tad ashamed to say that had wallowed in a brief moment of schadenfreude. But, still, it was nice to have been asked, anyway. 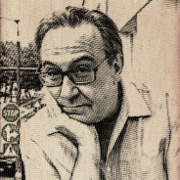